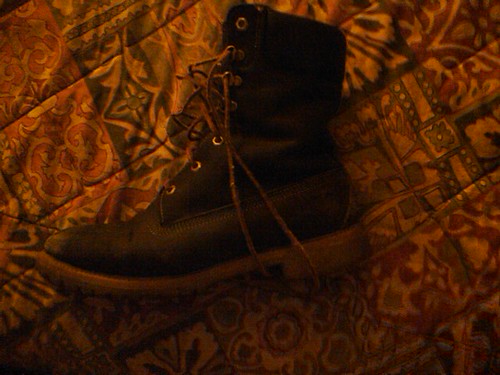 Here is everything I know about bootblacking:

1. First, find somewhere to black boots. There are many opportunities if
you look hard: gay bars, charity events at gay bars, beer busts at gay
bars, and also gay bars. In any case, wherever you choose will be pitch
dark, so bring a flashlight that straps to your forehead.

2. Like a hummingbird to a feeder, someone will eventually sit down.
Congratulations! You have your first customer. Roll up their
jeans/chaps/crinolines and remove their bootlaces, because you don't want
them to get dirty. How you do this with polish-stained hands and keep
everything clean, I have no idea.

3. Introduce yourself. Make small talk or a joke. But don't ask the
customer how they want their boots done. If they are new, like me, they
will be intimidated by the question and won't know what to say. "Uh, I
dunno... just polish 'em?" But if they really know about their boots or
they have a special preference, they will let you know.

4. Don't worry if their boots are "oil-tanned" (whatever that is... I
truly have no idea). If they are dumb enough to sit in your boot polishing
chair with boots that aren't supposed to be polished, then that's their
fault.

5. Don't attempt to clean their boots first. Or if you do, don't use any
water, because then the boots will need to be dried for a day and they
can't be polished that night. Knock dirt off as much as you can, or give
the boots a rubdown all over. Again, if someone sits in your chair with
dirty boots, they deserve whatever they get.

6. Apply as little polish as possible. Then whip it off fast with light
pressure. Remember this important rule about the bootblack community:
"Whatever you're doing... you're doing it wrong"

8. The boots will never be as shiny as you want, so do the best you can,
and stop after a reasonable amount of time, depending how much you like the
person in the chair. When you decide you're done, thank the customer. Help
them down from the chair. Gesture to the tip bucket and say something
like, "We're asking between $5 and $20 for charity". I'm too embarrassed to
accept money for bootblacking, but I don't want to do it for free, since I don't think
that is fair to other bootblacks.

9. You're done! Do it again with the next customer.

I'm not being sarcastic... these are the best rules I follow. There are
other things, like carrying along some silicon lube or windex to polish
rubber and latex. Or, if someone is wearing brown boots or cowboy boots,
I'll say something like, "Do you want me to polish those boots? Oh,
they're brown/red/yellow? Well here, let me put some Hubert's on them to
condition them." That usually makes people happy.

I haven't figured out some advanced stuff: what do to when an asshole sits
in your chair. How to deal with bar owners or event organizers. What to do
if there isn't a boot polishing stand or chair. How to polish boots when
you have three or four days to do it right. How incorporate sex into
bootblacking. But I'm willing to learn! Especially that last one...
Subscribe