Here is a photo of me when I was ten and eight years old, respectively. Man, I had hair back then. I had Ted Koppel's hair. It looked like there was a squirrel on my head. One of my lowest moments in junior high was when my favorite teacher made fun of my hair. I cut it into a mullet the next week, and it wasn't an improvement. 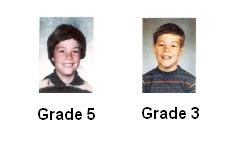 I wanted Sting's hair. I loved The Police, and wanted my hair to be long, straight, blond, and spikey. Hey, it was the eighties. So, now that my hair is almost completely gone, I serves me right. I bitched about my lack of style for so long that my hair got mad at me and left. We don't appreciate what we've got until it's gone. But at least I save a lot of money on "product" now.

Well, I'm a "short timer". I'm moving to Washington DC on October 1st, 2009. Work is transferring me to the east coast, but more importantly, I get to be closer to Master Thor, who I am lucky enough to serve as a slave. I know I have only few more weeks living in the bay area, and I have way too many things to do. I wanted to mention some of the men (and women, too!) who made my year in California so special.

I apologize for this post. I'm speaking emotionally about some of the people I met while living here, but it some cases I don't want to name names. I don't mean to be emo or cryptic. If you have a question, please email me off-line (kellogg@dim.com) and I'll be clear to you. Worse, I know I probably am forgetting someone. Probably someone really close to me, and I'll feel stupid that your name didn't come to mind right away. Trust me, I didn't mean to leave you off the list.

There were seven men I met in San Francisco while I was here who really affected me. I consider all of them friends, and (especially in the case of Sam) maybe a lot more. It pains me that I will never build a stronger relationship with them
--------------------
Sam Campbell

Twenty-seven guys I never spent much time with. Amazing men, all of them. I wonder why I never called or emailed them to get together more often
----------

Regrets? I've had a few. But then again, too few to mention. So I'll mention them here
-------------------------
* The Very Nice Bear who just wanted dinner with me, and I blew him off. Sorry, I'm a dick. Sorry sorry sorry
* The hot stud who lives near me, is into the same kinky things I am (which is *rare*), but he and I were too busy to meet up, I guess
* Hot sub who wanted to serve me, and I never let him
* I feel bad that I never did anything with the awesome K9_unit of pups and handlers
* Even though I played rugby for a half a season before breaking my hand, I never made friends with any of the other players, even though I hung out after the game and and drank and volunteered
* I never joined the local hockey or wrestling clubs
* I missed Bigfundrew's party while he was in San Francisco

I Topped three boys over the past few months. I feels great to be a dominant, and I had a lot of fun with these boys. But as a Top, I'm kind of a dick... I can't even remember one boy's name, even though we played three or four times in various dungeons. I put a lot of effort into giving the boy a good experience during the scene, but since Topping is not as important to me as being a slave, I don't call or write or follow up like I should. But I am grateful for their service and the fun we had. So, I'll just refer to these three boys as:
----
Boy #1
Boy #2
Boy #3

Here are thirty-three bloggers on LiveJournal who live in the bay area that I hoped to meet, but for some reason, never emailed or called
---

I hope I'll be back someday. I love San Francisco: the weather, the sites, the gay life. And I especially love the human beings... I will miss you all. Hope to see you at leather events, or when I come to visit.

Master Thor is coming to Washington DC this weekend to help me find a place to live. We are having brunch Sunday morning at Georgia Brown's in downtown DC (950 15th Street, NW between I and K Streets, NW). Is anybody interested in joining us for a 1 pm reservation?

They have a jazz brunch for $36.95 per person. It's really worth it: gumbo, fried chicken, catfish, grits, and more! Brunch only goes until 2... I hope we can eat enough in an hour. {grin}

Send and email or LiveJournal note to

thornyc or myself if you want to get together while W/we are in DC.