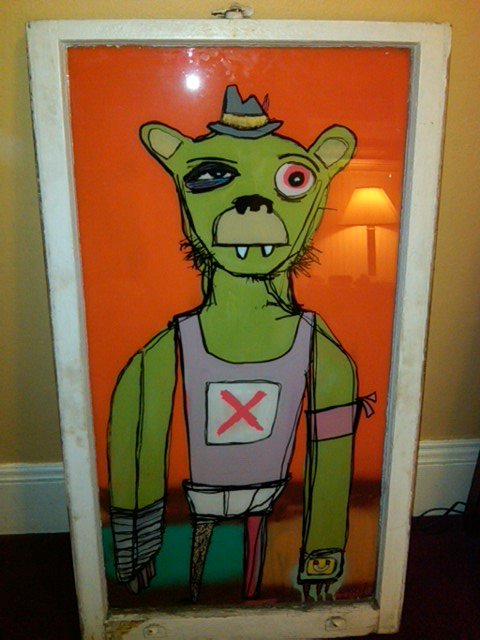 It was a strange coincidence, very San Francisco... I was drinking at the 440 in the Castro with some bears. I remarked about the art in the club, and how a friend of mine bought one of the paintings - a picture of a robot painted onto the glass of an old window. He reminded me that I'm leaving California in a few weeks, and if I wanted a piece, I'd have to move fast. Good point.

I stepped outside for a breath of fresh air, and there was a guy there . It was the artist Pete Doolittle. He was swapping out a new painting for one of them that was unsold. I saw the old painting - the feral bear - and offered to buy the piece on the spot. Pete liked the idea... that way he wouldn't have to bring it back home. I hit an ATM, and five minutes later, I am the proud owner of some art for my new house in Alexandria, Virginia.

I love the art, and it will remind me of my amazing year in San Francisco. I think the bear looks like me: a black eye from rugby, and the broken hand that was in a cast for three months this winter. A scruffy beard from my attempt to grow out my goatee and a magnet in the other hand. I like to think it's the obligitory iPod every Bay Area bear is required to own. A trendy t-shirt in homosexual pink. Underwear just like those I wore in the Pride Day parade. And a fedora, just because Justin Timberlake wore them for a while.

The artist says he was inspired by watching old cartoons on cable recently, where whales can be yellow and dogs can be purple. So, he made a green bear. But I like to think it's a representation of who I was and who I became this year.