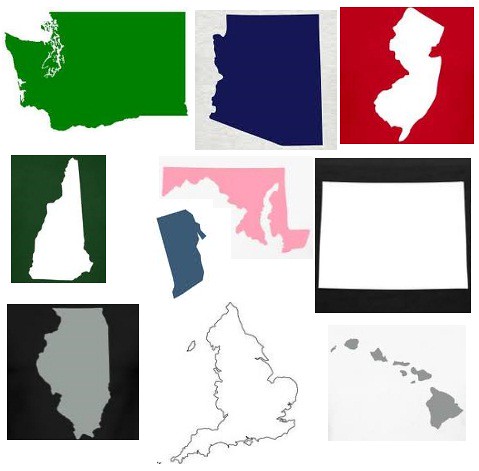 Lots of news on gay marriage lately... so much that you may not have been able to keep up. Here are some of the more exciting news items from the US and abroad:

Washington
On Valentine's Day, legislators introduced a bill in the house and senate to legalize gay marriage. However, this seems merely a gesture, as it's not expected to pass.
http://blog.senatedemocrats.wa.gov/ed-murray-news/a-legislative-valentine-to-gay-and-lesbian-families/

Arizona
Attorneys for the state filed to eliminate benefits for the 800 state employess who asked for coverage for their gay partners and children. Benefits will remain in place until the federal court reviews the case years from now... I'm not sure why this is a federal issue.
http://azstarnet.com/news/local/govt-and-politics/article_75cc370a-3464-5388-97df-b83fc5359c43.html?mode=story

New Jersey
A gay marriage bill died in January, with no plans to revisit the issue in 2011.
http://www.nj.com/news/index.ssf/2010/01/nj_senate_rejects_bill_legaliz.html

Rhode Island
Last week's contentious debate will probably not bring full gay marriage to the tiny state, but it's great there is momentum.
http://www.projo.com/news/content/same-sex_marriage_hearing_02-10-11_B5MD4HC_v36.1a1c347.html

New Hampshire
A hearing Thursday to decide if the legislature should go ahead with plans to repeal their gay marriage law. No decision yet on what would happen to the gay couples already married in that state.
http://www.concordmonitor.com/article/240341/voters-dont-want-gay-marriage-repealed

Hawaii
House and senate approved civil unions. Plus the new Democratic gov said he'd sign it, in contrast to the Repub gov who vetoed it last year. So, this seems like a lock.
http://www.staradvertiser.com/news/breaking/115987444.html

Great Britain
May convert gay civil unions to full marriage by the end of the week.
http://www.pinknews.co.uk/2011/02/13/british-government-reportedly-set-to-introduce-full-gay-marriage/
Collapse