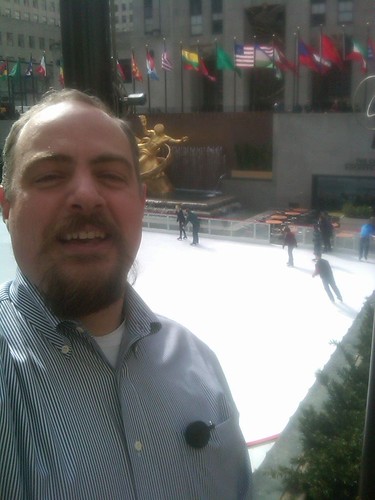 I feel like a self-centered dick when I post on LiveJournal that I'm having dark thoughts. So, I'd like to post the opposite - I'm doing really well lately. I haven't been depressed since that week in January. I haven't heard any suicidal voices in my head, my new job is fun, and I am very much in love. Sure, I could use some more money and I'm heavier than I've ever been. but I'm actually having fun paying off bills and jogging every day, and I feel that I have a good sustainable plan.

I hope everyone else out there is doing well, too. Here are some photos of statues around my work building: the Rockefeller Plaza statue I've always loved, and a bunny on top of an elephant. 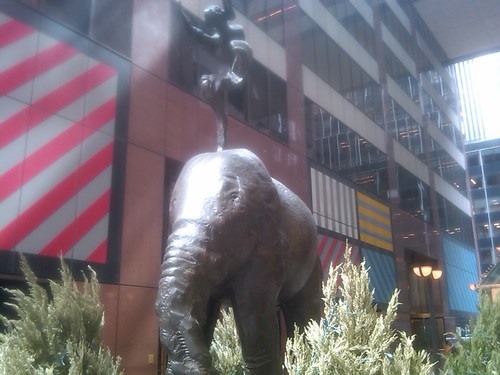 The bunny/elephant was done by the artist Barry Flanagan. You should check out his work!

As a treat for myself, I thought I'd buy some CDs from the seventies folk-rock period. I am most impressed by female singer-songwriters who wrote, sang, and recorded their own music. In this age of vapid synthesized American Idols, I find it refreshing to go back thirty years and enjoy the originality of the women artists of previous decades.

Here are some CDs I don't own but think I should listen to:

What about these artists? Can they be included in the genre?

Can you recommend any others? Aren't there some famous lesbian singers I'm missing like Suede and Ferron and Holly Near and Cris Williamson?

and then let me know what you think! Straight people must get tired of the question. Was Lincoln gay? Was James Buchanan gay?

If you think of homosexuality as ONLY about the sexual act, then the correct answer is = we will never know. We don't know if Ghandi ever had gay sex because we weren't there. Photo or it didn't happen. However, as a gay man, I sometimes look at historical figures and think, "Oh yeah... I can really relate to that behavior... when I was closeted, I did those exact same things."

For example, read this section from a new book about Ghandi:

The love of his life was a German-Jewish architect and bodybuilder, Hermann Kallenbach, for whom Gandhi left his wife in 1908. "Your portrait (the only one) stands on my mantelpiece in my bedroom," he wrote to Kallenbach. "The mantelpiece is opposite to the bed." The two pledged "more love, and yet more love . . . such love as they hope the world has not yet seen."

But when Ghandi thought about male-female relations, he wrote this:

"I cannot imagine a thing as ugly as the intercourse of men and women."

If you are a straight man reading this post... can you read the above and see yourself reflected in those quotes? That straight sex was "ugly", but with a male friend you could make love as "the world has not yet seen"?

I think Ghandi might have been asexual. Bisexual maybe. Gay probably. But definitely not straight.
Collapse