Is America ready for a female president? Or a black president? What about a gay president?

Well, back in 1853, Franklin Pierce named William Rufus de Vane King as vice president. A name like that should have been the first clue. President Andrew Jackson called him, "Miss Nancy", while the governor of Tennesse Aaron Brown dubbed him "Aunt Fancy... rigged out in her best clothes". 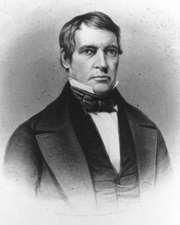 Brown went further, describing King and president James Buchanan as "Buchanan and wife". Buchanan and King lived together for 15 years before Buchanan became president. Neither man ever married a woman. After King left on a trip to France, Buchanan wrote, "I am now 'solitary and alone,' having no companion in the house with me. I have gone a wooing to several gentlemen, but have not succeeded with any one of them. I feel that it is not good for man to be alone; and should not be astonished to find myself married to some old maid who can nurse me when I am sick, provide good dinners for me when I am well, and not expect from me any very ardent or romantic affection."

Modern anti-gay apologists may argue that this is just an example of the flowery language of the nineteenth century. However, I think this avoids the truth: homosexuals were not invented in 1969. Many gay men feel that they were "born gay", and even if they grew up in a heteronormative community, they developed homosexual feelings absent any coercion of media or pop culture. So, if people can become gay before the age of 6 without any exposure to gay culture... why not in 1853?

King drank himself to death in Cuba, serving as vice-president for only 25 days. The office was vacant until 1857 when another vice president was named. Officials fought over where to bury his body, digging him up twice to move him to a new graveyard.