This came from Amazon last night: "Palimpsest" by Catherynne Valente. 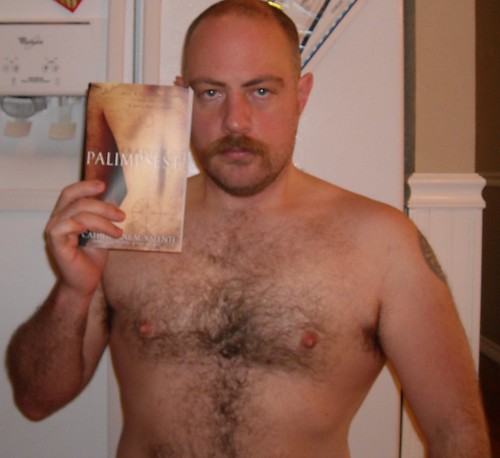 I just started the book today, and will finish it on my plane flight to the Ft. Worth Gay Rodeo later this afternoon. It's a quick read, with big print in a beautiful cover. The plot is the new type of Neil Gaiman-like science fiction/fantasy, where imaginary things exist in a strange world, but the author doesn't beat you over the head with the details. People can read each other's thoughts. Cows fly. Get over it.

The flowery, almost-poetry prose and flamboyant description of setting reminds me of Tom Robbins, if you like him (and I do, very much). The story is about a city more than a linear plot, much like "The City of Ember" or "Devil In The White City", which tried to do similar things. It's basically a character sketch of four interlinked characters who explore the city and themselves, Bloomsday-style.

It's a good book so far, but I can tell it will be short. Barring any sudden plot change, it seems more like a short story... a tasty bit of summer fiction that makes you feel good but doesn't hit you over the head with a moral. This is the type of story that Umberto Eco can stretch to 800 pages. Instead, I think "The Palimpsest" is meant to be read as part of Valente's other works: not as a book in a mini-series that has to be read in a certain order, but more like another glimpse into a wonderful and twee world of delicate and odd things.

The author is on LiveJournal as: http://yuki_onna.livejournal.com or

yuki_onna.  Add her as a friend!

"November tasted the ink of her pen lightly. Acorns and copper. Ash.

She had dreamed heavily and the dream clung to her still - November had always been a prodigy of dreams. Her father, a librarian, had made her write them down, and perhaps this had been the beginning of the slim brown books which now numbered so very many. She dreamed in color, more than color, in shades of gold and scarlet impossible in the waking world. She dreamed in languages she did and did not know, she dreamed strange and wonderful faces, narratives of recursive complexity, and her recall was meticulous, detailed, perfect as a list.

There had been such a smell in the place of her dreams, of sassafras and the sea, bay leaves and dandelion seeds blowing wild, of coffee plants, of sweat. The smell burned into her; she had striven after it in the way of dreams until she could hear the starry surf on a bright shore.

The following things are essential to a city, she wrote. She crossed out essential and wrote above it in compressed script. She did not erase or begin again - mistakes were as essential to the noun-stacks, the combs of names, as industry to a city. They showed that the stack was not arbitrary, that some words had been excised in favor of others, that choices had been made, casualties counted.