What Is The Sound Of One Ear Flapping?

Since the beginning of the year, I've been meditating for 15 minutes every day. I'm not very good at it, as you can imagine, because I'm a hyperactive fuck. But when I was in Japan for a semester in college, I started studying zazen by reading koans and sitting shikantaza (translated as "to sit and do nothing else").

I sit in the middle of the room. I used to have a yoga mat, but I seem to have misplaced it. Instead, lately I use a grey circular mat that says "NYC sewer". Fitting for me, huh? I usually sit in a half lotus ("hankafuza") posture, my back straight and my hands cupped in a bowl shape in my lap. My eyes lowered, but not actually closed so I am awake. In Japan, the Master used to come behind you and hit you with a stick if he thought you were sleeping. Maybe *that's* why I liked zazen so much! {grin}

The goal is to breathe deep into my stomach (the "hara"), and to think about nothing. That's the hard part. I picture a beautiful mountain lake. Each thought I have is like a stone being thrown into the lake and rippling outward. Some days, the lake is a mess of waves and sympathetic resonance. Other days, even the idea of the lake goes away, and the ripples in the lake turn into blackness, with a weird neon screensaver, like the pulses in the early WinAmp visualizer. Maybe you know what I mean.

Sometimes, I hit the jackpot, and my brain goes away entirely. It's kind of like being on poppers. I've been getting there less and less lately. So, I decided to shift my meditation a little. Here is what I've been doing lately: 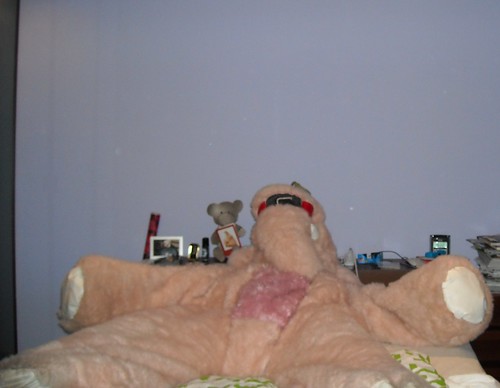 I was put into a leather sleepsack and attached hood by a great friend earlier this year. And I had a minor out-of-body experience. Without sound or light, and with the uniform pressure all around my body, I got to the rippleless-lake state within seconds. So, I've decided to explore that direction.

I can't get into my leather or rubber sleepsack by myself. Plus I'm not sure it's safe to do heavy bondage alone. But I can do similar things: I've tried heavy down sleeping bags, wearing multiple layers of clothes to bed, or sleeping in weird locations like on the floor on in an enclosed space like a cupboard or closet. I've also been borrowing a huge pink elephant costume from my friend in L.A. for the last few months. It's a great suit, and feels wonderful when I get into it. So, I've been sleeping in it one night a week. 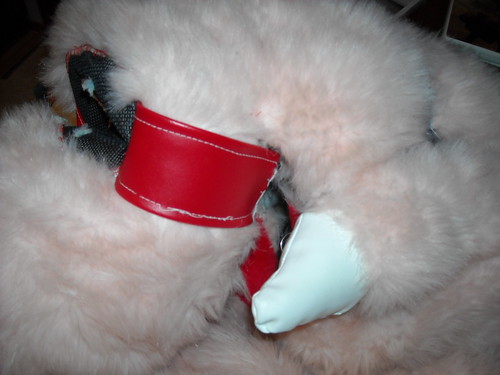 There are a few kinky Google groups that promote a *really* unique fetish. These guys are furries, but they are into locking boys up into animal costumes. They get bonus points if the boys have painful torture devices attached: clamps on nipples, chastity device on dick, balls tied up, a remote-controlled electrical buttplug pulsing at the command of the Top holding a little remote-key watch fob. From the outside, it looks like a cute fuzzy football team mascot. On the inside, you can hear faint whimpering and slight jerking motions when the voltage is turned up.

Lift up the trunk, and you see the boy inside. Tears in his eyes, a gag preventing him from making any noise. His hands are in padded fistmitts. But even if they weren't, there is no way the boy can reach around to undo the single small zipper in the back. Plus, the zipper is secured with a padlock anyway. Next time, the Top threatens to use superglue. Ben Gay and itching powder are applied liberally. Maybe the boy is wearing a diaper so he can be left in the suit for hours, and forced to sleep in it. Maybe there are games with breath control, so the boy has to ride through the pain by regulating and concentrating on his breathing... which is great training for zazen. 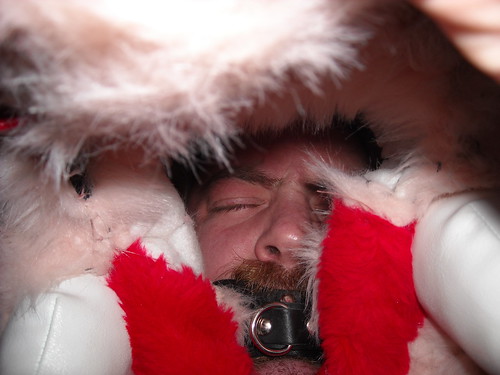 And that's the way I meditate lately.